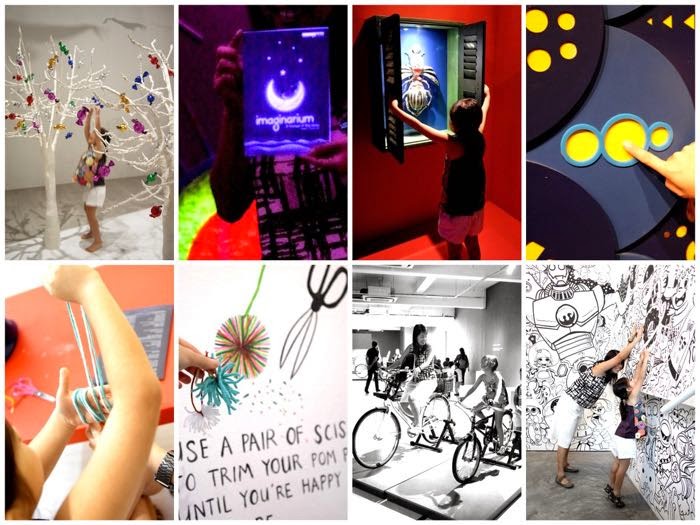 There's only a short week of the school holidays. Resolutely blocked out and rescheduled one morning of meetings in order to have some time with Y and Lil'Missy at the Singapore Art Museum's (SAM) fifth edition of contemporary art exhibition for children. Themed 'Imaginarium: A Voyage of Big Ideas', it spreads across 8Q's four levels. Bring a pair of socks.

Paid more attention to the interactive quotient of the artworks than its artists. Well, it's meant to sustain the interest of children right? No matter how colorful or intriguing like the bugs made up of nuts and bolts and neon magical worlds in Kumkum Fernando's 'Kiko's Secrets', as long as the children can't touch it, then they aren't going to be very interested in checking out stuff after a while. I can't tell how much Lil'Missy likes the whole experience, but she definitely had some fun. She liked the pom-pom making in Izziyana Suhaimi's 'Let's Make! Studio'. Lucky us caught a break and quickly finished making two pom-poms before 40 children waltzed in and we whooshed out. Not going to have a chance to attempt sewing or embroidery. 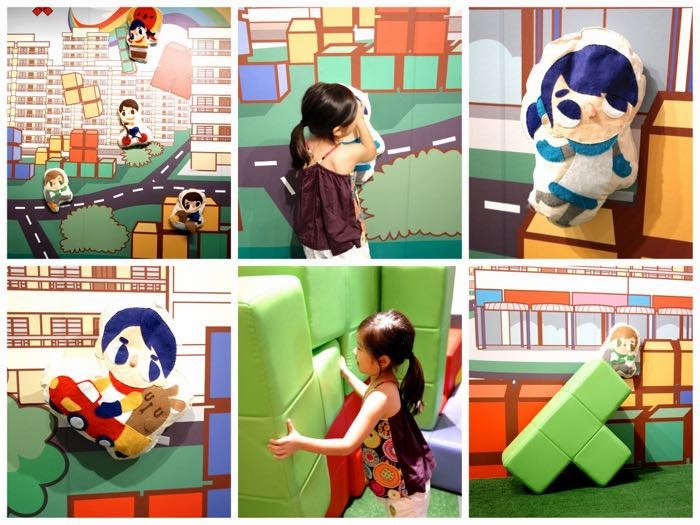 Chiang Yu Xiang's 'We Built this Estate!' held such chirpy colors. It is supposed to be an interactive exhibit filled blocks designed like giant Tetris pieces, urging visitors to create whatever they can imagine, to build our tomorrow. Tetris! To the kids, they're just blocks to be shifted around. Kinda meaningless to the younger children because they don't have the strength to lift or move the soft foam (?) blocks, and they're not allowed to sit or lie and jump on them. Gallery sitters looked a bit stressed as they followed the children to tell them "Don't do this....don't do that..." Zzzzzz. There were hand-sewn fabric dolls stuck on the wall paintings with velcro. In theory, they could be pulled off and shifted. BUT, the gallery sitters would repeatedly remind the children to be gentle because they're handsewn. ERRMMMM. HALLO? Not going to work lor. If the fabric dolls are so precious, don't let them be removed or allow any handling. This exhibit slips into an unintended feature of 'Imaginarium' because it's eye-catchingly located right on the ground floor. Like a playroom for babies, toddlers and young children. Being continuously told don't don't don't was a real downer. It made me want to petulantly jump on those blocks.

Giggled at Lee Jeeyoung's 'Dream House'. That was really the photo-op room. Candy, giant lollipops and all. Kids were welcomed to 'join the artwork' by grabbing a paper sweet to hang onto candy trees. What was most cool- the doodles that wound around the staircases by Band of Doodlers. 'Imagin-a-doodle' held so many characters and illustrations that captured the attention of every child who walked by. Awesome. We couldn't have been the only ones who had an urge to color in the illustrations. LOL. Couldn't linger or tell stories or explain the artworks thoroughly to Lil'Missy right there and then simply because of the never-ceasing crowds. We went at 10am; it was crazy. If there was anything that had caught the little girl's attention during this visit that she would like to check out, she would have to return on a quieter week day. 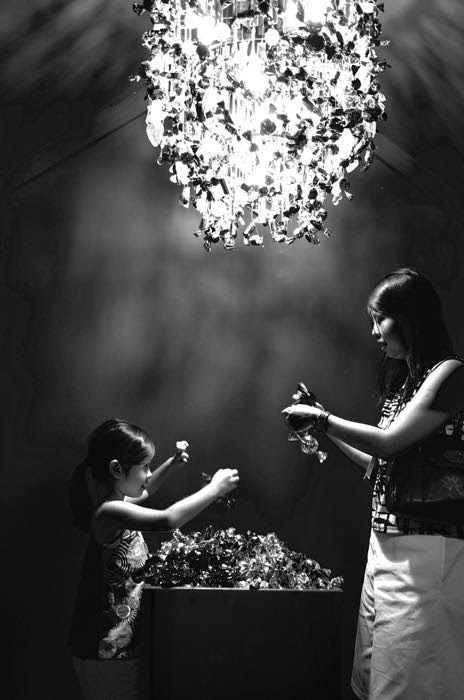 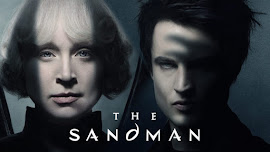 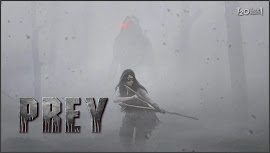